The features of this Act are as follows:

In order to extend this Act in the former permamnently settled areas of Goalpara District and Karimganj Sub-Division, a Bil, namely, the Assam Land Holding (Adoption of relationship under the Assam Land Revenue Regulation, 1886 in the acquired permanently settled estates) Bill, 1974 has since been passed by the State Legislature. The Bill after becoming an Act will repeal the Goalpara Tenancy Act, 1929 and the Sylhet Tenancy Act, 1929 and enforce the Assam (Temporarily Settled Areas) Tenancy Act, 1971 in the erstwhile permanently Settled areas.

To make the land reforms programme effective, there should be some close organisational links with the potential beneficiaries. The poor peasant and agricultural labourers are still unorganised and not vocal and hence not assertive. It has to be considered whether the formation of Peasant Organisation Circlewise/ Panchayatwise should not be given a trial. Such organisation on non-political and voluntary basis could put some curb on the influential land owners who are always in the lookout to protect their own interest at the cost of the poor peasantry. Such voluntary organisations will be better equipped to represent the case of the beneficiaries in the updating of records, and selection of the genuine landless agriculturists for the settlement of land, and detection of under tenancy.

The Agricultural Universities sprawling out in different parts of the country may also render service in the matter of land reforms. The graduates coming out of such Universities should be acquainted with the latest reforms measures and they in turn can spread the message of agrarian reforms and where necessary, take leadership of the peasants with whom they will be in constant contact. 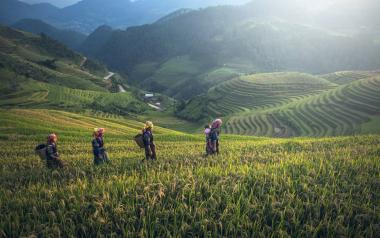